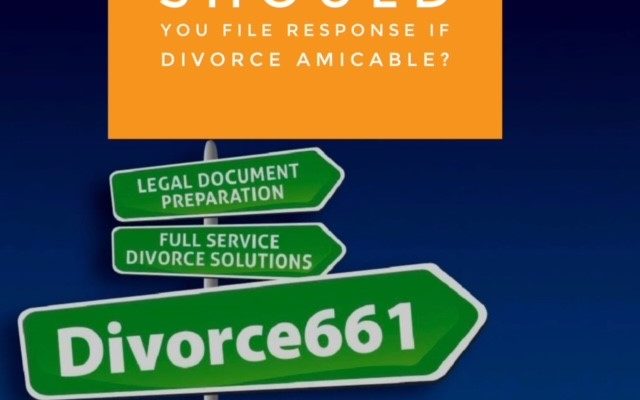 Amicable Santa Clarita Divorce?  What Not To Do

Hi there, Tim Blankenship with Divorce661.com and in this article I want to discuss that if you have an amicable Santa Clarita divorce what options you have as far as not filing a response and why you would consider not doing that.

In short, I am going to explain why you don’t want to file a Response (Form FL-120) when you have an amicable divorce in Santa Clarita.

I need to be very clear, we are talking about amicable divorce cases only!

Okay, let’s get into it…

What a lot of people don’t understand is that there are two court fees in an uncontested divorce case.  The terms “uncontested” to the court literally means, “a Petition and a Response were filed”.

To you this probably means that you guys are in agreement and don’t need to go to court.

That said, the first reason you don’t want to file a Response if you have an amicable Santa Clarita Divorce is because it will trigger a second court filing fee.

That’s right, as I mentioned above, a lot of people are not aware that if you file a response there is a second court fee. And if you amicable, there is a court procedure known as default.

But, there are two types of defaults and I want to be clear what I am talking about because a lot of people get this wrong.

When people hear default, they instantly think that they are going to complete their amicable Santa Clarita divorce without involving the other party at all.  This is not what I am referring to and if you listen to my videos on Youtube, you know I talk about that A LOT.

I am specifically talking about the process of a default, BUT with the other party fully participating and and signing a marital settlement agreement, just without triggering the 2nd court fee because we are purposely not filing the response.

Don’t get me wrong, it is not a mistake to file your Response.  I know, the summons you received that if you don’t file a Response in 30 days you are totally screwed.  I get that…

And this is likely your first divorce and you want to follow the rules.  Of course you do.

But, there are two sets of rules the court does not tell you about.

The reason I bring this up so often, is while we get a ton of calls with clients asking us to take over their amicable case and finalize for them, we get just as many people who have called us AFTER they have filed the response.

And when I speak to them and ask why they filed their Response if they were amicable, the answer is always, “That’s what the court instructions were.

So I am trying to get out in front of this and save you some money.

The hope is that you are reading this article BEFORE you file your response.  We are all about saving our clients money when it comes to their amicable divorce.

Please give us a call if you need assistance with your amicable divorce anywhere in California.